The nation is abuzz with a debate on what exactly “Nation” is. Each party is putting forward his or her own theory of nation and anybody who doesn’t agree with their definition is labelled with different adjectives. The adjective can be “anti – national” or “intolerant”. One may say that it’s his freedom of expression while other may label it seditious. One may say that it’s how the nation was envisioned by our forefathers while other may say that it is a backward thought which needs modifications. 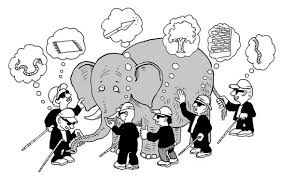 This debate reminds me of the story of the blind men and the elephant. The concept of the nation is the elephant and we are the blind men. Just as they fought over their limited knowledge, we are doing the same when it comes to our discussion of nation. And as they never understood what an elephant is, we have also failed to understand what the definition of a nation is.

Now, let’s think about what these people think,

We can also think of different situations apart from these. But what remains constant is the difference in what these people think. Their definition or rather expectations from the nation vary according to their present situation and would generally change if they swap positions with each other. These expectations actually define their idea of a nation and they stand by it whatever the others may think about it.

But if you ask me whether these people are patriotic then I would say that it is ingrained into their DNA and they cannot shy away how much hard they try. That is the beauty of being human. We are divided over everything but when it comes to devotion for our country, we are all the same.

But if all are patriotic then why don’t they have an agreement. Let’s forget about this debate for a while. For some time, let’s make our world very small. Let’s just think about our family. We all want progress, happiness and prosperity in our family but it is seldom found that all in the family have a common agreement over everything. Each one wants to put forward his idea and if he is not allowed to do so, he would say that the other is insensitive or intolerant. But that doesn’t stop us from respecting and loving each other.

In the same way, the constituents of the nation also have their own views and each view much be listened to before labeling them with colourful adjectives. By force we can make others to obey our orders but we can’t make them love us. And love can take a nation forward, toeing the line can’t.

One thought on “किसका Nation सही?”